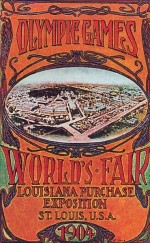 The 1904 St. Louis Olympics experienced many of the same circumstances that plagued the 1900 Paris Games, in that they were held at the same time as a World’s Fair. While in 1900 the Olympics were to coincide with the Exposition Universelle, the 1904 Olympics were actually awarded to Chicago. However, the organizers of the World’s Fair in St. Louis threatened to hold their own athletic competitions that would eclipse and probably halt the Olympic movement. In response, Baron de Coubertin yielded and moved the Olympics to St. Louis, hoping gain prestige and fame for the Olympics, rather than sticking with the original Chicago pick. 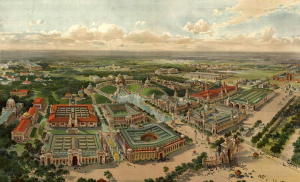 However, there was a more concerted “marketing” effort in that athletic events were to be held every day of the World’s Fair and they were actually referred to as Olympic events, rather than Championships or other terms used in Paris. Again, there were many events held that are not considered to be part of the Olympics by the IOC, but were held alongside and in the spirit of the Olympics. 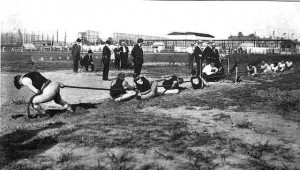 Sadly, the largest problem with the 1904 Olympics was a major lack of international participation. Of the 94 events acknowledged by the IOC, only 42 (less than half) actually had athletes from any country besides the US. Additionally, while the opening and closing ceremonies were in July and November, the majority of events were conducted during a weeklong period from Aug. 29 – Sept. 3 (Mon-Sat).

While the Olympic movement still had not managed to become the juggernaut we know it as not, it was learning with each event and although the future was uncertain then the hard work of organizing these events would be passed down and we can appreciate it today.