At the Congress held in 1894, Athens had been selected as the city to host the first games of the Modern Olympics and a Greek, Demetrius Vikelas, had been elected as the first president of the International Olympic Committee. However, even with the decision made there was still a lot of trouble pulling off the games and no one was sure it would be successful at the time. As is the case again today, the Greek government was in political and financial turmoil and the cost of the games was quickly piling up. The Prime Minister and the President of the Greek Olympic Committee were ready to call off the games for lack of funding, but Coubertin, Vikelas, and the Crown Prince of Greece all joined together to promote a fundraising campaign that raised all the money needed and secure the Games. 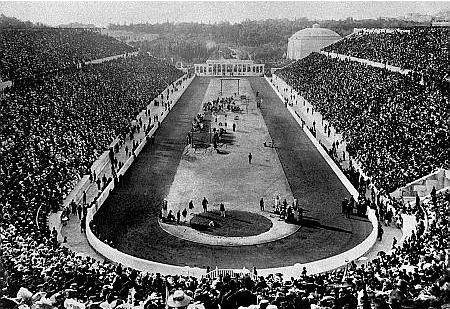 At the opening ceremony over 80,000 people were on hand to see the Opening Ceremonies, which at the time did not involve the Olympic flame or much of the pageantry we see today, but did include dignitaries and musical entertainment.

Over the next week events were held in Athletics, Cycling, Fencing, Gymnastics, Shooting, Swimming, Tennis, Weightlifting, and Wrestling and all competing athletes had to meet the status of amateurs (except for fencing where professionals were allowed to compete in their own division) and the rules for events were set by the IOC since each country’s athletic organization typically used different rules. Many events had been proposed at the initial Congress on the Games, but were never finalized, although Rowing and Yachting were scheduled, but not run due to bad weather conditions.

At the 1896 Athens Games the US won the most “Gold Medals”, while Greece itself took the overall win in the medal count. German wrestler and gymnast Carl Schumann won the most medals at the Games. While first place winners at the games are recognized as Gold Medal winners, in fact the medal for first place at the 1896 Athens games was made of silver, with a copper medal given to second place. Winners were also presented with an olive branch and a diploma. 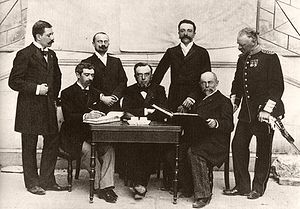 Of all the athletes and events at the Games the Greek fans were most interested in the marathon, which was won by Spyridon Louis who became a national hero for his accomplishment.

Links to artifact pages for the 1896 Athens Olympics: